John Carter has been a farmer since the day he could walk. He started out tending to the chickens, learned to drive a tractor by age ten, and before he knew it he was running the largest rotational grazing dairy farm in Maine.

He’s worked as a rancher in New Zealand through a farming exchange program, but has otherwise not strayed far from the farm in Bethel. Whether around town or at the farmers markets he enjoys a good conversation – but you won’t tie him down for long before he’s on the go and back to the farm. John is a skilled cook and horseback rider, and has a weakness to Ferrero Rocher chocolates, especially on long drives.

Despite his high-speed tendencies, John was corralled by his wife Lucy. They married at the historical Middle Intervale Meeting House in the fall of 2019.

Lucy Carter was born in Long Island but has since abandoned her New Yorker identity. She has lived all over New England, moving from New Hampshire to Vermont to Maine. Lucy enjoys petting her yellow lab Willow and baking cookies.

The Carters have four kids. The three boys’ usual antics involve playing outdoors together, and (to their demise) pitching in with the animals and crops.

Ella was born in 2019, and her smiling face and giggles have become the backdrop on Intervale Road. She’s a fan of all foods fresh and local, from blueberries to ground beef and eggs – a head start for her farmer’s physique! 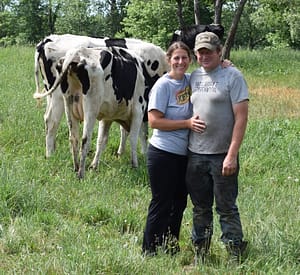 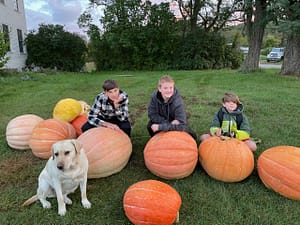